Lynne Doughtie: Inspiring Women to Climb to the Top 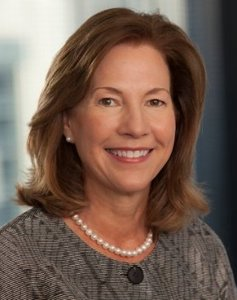 In a time of more women holding executive positions in companies such as International Business Machines Corporation (IBM) and General Motors (GM), Virginia Tech alumna Lynne Doughtie serves as an inspiration for women with a goal to excel at their jobs and reach their goals. She is a huge believer in building confidence and taking risks in order to have a long-lasting and successful career.

Lynne Doughtie is currently the CEO and Chairman of KPMG, one of the Big Four accounting firms that offer financial audit, tax, and advisory services. In 2015, Doughtie became the first female CEO of KPMG and has also held multiple leadership positions during her time with the company. As the CEO, her goal is to foster an environment in which the next generations are nourished and can face challenges the right way.

Doughtie began her career with KPMG in the company’s audit practice after graduating from Virginia Tech in 1985 with a Bachelor of Science degree in accounting. She originally found her love for accounting when she helped with her family’s business growing up, and decided that this was what she was meant to do.

Staying involved in Virginia Tech has remained an important part of Doughtie’s fulfillment. She is a current Cabinet Member and has served as President and Cabinet Chair for the Pamplin Advisory Council. She has also served on the Pamplin Accounting and Information Systems Advisory Board. Doughtie received the Virginia Tech University Distinguished Achievement Award in May 2018 and the Pamplin College of Business Distinguished Alumnus Award in 2007 for her involvements and contributions to the university. Aside from her awards received at Virginia Tech, Doughtie has also been named one of Fortune Magazine’s Most Powerful Women in Business and Accounting and Today’s Magazine Top 100 Most Influential People. 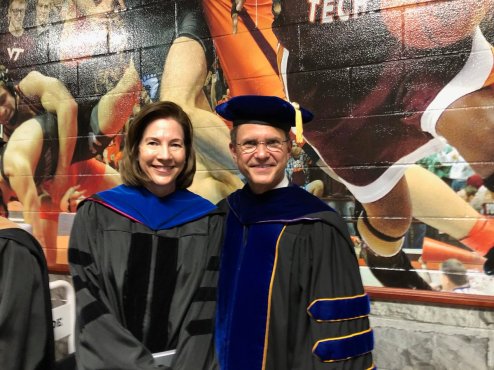 Lynne Doughtie was invited to participate in a panel discussion at this year’s Hokies on Wall Street event that a handful of Collegiate Women in Business members were able to attend. During this event, she emphasized the importance of giving back to Pamplin. She said that she has been donating a part of her paycheck since she started her full-time career. Doughtie stated, “I only gave $15 and I was so proud of it. Virginia Tech did so much for me, so it has always been important for me to give back.” The CEO is a prime example of someone who lives out Ut Prosim in her life despite the fact that she graduated many years ago.

Doughtie is very involved not only in the Virginia Tech community but also on the Board of Directors of other organizations such as the National Academy Foundation (NAF), cancer-focused nonprofit LUNGevity and the Partnership for New York City.

Building confidence in your career is crucial if you want to reach your goals and have a fulfilling career. In an interview with Business Insider, Doughtie explains the way she thinks confidence is gained. She argues, “…it shouldn’t just come because you say: “I’m smart and I can do this,” I think it comes from action. It’s actually just — jump in, do it, impress the heck out of yourself, that’s how you get confidence. And then as each new challenge and opportunity comes, you jump in again.” This is a valuable point made by the CEO because no matter how well you do in your classes, it won’t matter if you don’t practice applying it somewhere. Therefore, it is a great idea to get involved in organizations on campus, do well on your projects at your part-time jobs, and/or get internships so you can apply what you learn in the classroom to these organizations. Just go out and do it.

Like all of us, Doughtie has experienced many challenges and disappointments in her career but has kept going by learning in new positions and experiences. In the same interview with Business Insider, Doughtie stresses the importance of your professional growth of always raising your hand for new opportunities and being confident in your abilities when taking risks.  She says, “When you feel you’re most uncomfortable… that’s actually great because it means you’re growing.” In continuing on this theme, she attributes her ability to take risks as the reason why she got all of her promotions because it’s the driver for growth in your career. She explains, “Careers are really long. At 13 years it seemed, like, “If I don’t do this one thing, my career’s over.” No, it was just starting. And I think that my ability to rise through the ranks at KPMG, I was clearly benefited by having a variety of experiences.” While it may seem scary to take on a new role or ask for a promotion, Doughtie’s career showcases that it is one of the ways that new doors will open for you that can present you with new opportunities to learn and grow. 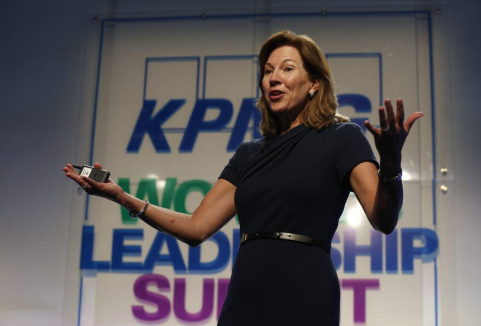 Becoming the first female CEO in KPMG’s history made headlines in 2015. Lynne Doughtie recognizes that this is a huge accomplishment and continually strives to empower women in the business world to help them know that success is attainable. She believes that her success is due to watching others. She explains, “I feel a sense of responsibility to reach in and encourage and sponsor and mentor, and to show women that they can do this, and that’s very powerful. It goes full circle to how we started the conversation about even just me seeing my mother and my father, and the things that they did…and you can see yourself doing that.” As women in the business world, we should empower other women and be good examples of what a successful woman looks like. Here in Collegiate Women in Business, we strive to create a supportive environment that makes our members feel ready to achieve anything they want to. Female support is a powerful thing!

Lynne Doughtie has and continues to encourage women to use their unique talents and abilities as they strive for success in their career. As she continues to pioneer the way for women in the business world through her past and current leading roles, she truly sparks inspiration for women to climb to the top.

Mindful Connection: How to Stay in Touch While Avoiding Burnout

Resume Remedy: Tips on How to Perfect Your Resume

Paying it Forward with Non-Profits

Black History Month: How You Can Promote Diversity

It's in a Book: Reading Recommendations for Professional Success